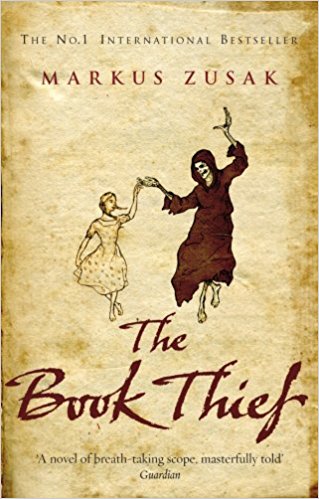 The Book Thief by Markus Zusak

Set in Germany during the Second World War this book is narrated by death. Not the vindictive stealer of life we assume, but a more paternalistic purveyor of souls. Like a character from Greek myth he is just there to carry people to the other side. There is almost a tenderness in the way he speaks of carrying the children.

In common with more modern books, such as The Boy in the Stripped Pyjamas, The Reader and Valkyrie, this book gives the German perspective. Similar to Anne Frank’s Diary, the reader is introduced to a girl’s perspective and her relationships with German Jews. Initially I wondered why it was necessary for her to be a book thief, apart from her poverty. Then I reflected on the fact that in Nazi Germany a lot of books were burnt, therefore there is something seditious in books themselves. Equally due to her background she has not learned to read very well and this becomes part of her development, although I don’t think this is overly represented in the book.

Liesel’s relationship with Ruddy is one of camaraderie and mutual support. In one sense he is Liesel’s partner in crime when she goes to the mayors house to steal the books. It also emphasises how isolated she is and how much she depends on her relationship with him and Max. Liesel’s adopted parents display both generosity and practicality. Papa is the dreaming musician who paints people’s houses and plays the accordion. He often paints for nothing, including painting over the offensive graffiti daubed on Jewish houses, something which is forbidden by the Nazi’s. It is this behaviour which keeps him out of the party, but it is his generosity giving food to marching Jews which is Liesel’s inspiration for her later actions. Mama is the practical one, taking in ironing to earn money to feed the family. Work which diminishes throughout the novel, whether from poverty or due to her husband’s behaviour it is not totally clear. Yet despite her strict exterior she takes Max in and is concerned that he does not freeze to death in their basement. Max like the mayor’s wife has nothing to give but books. She leaves the window open to allow Liesel access to her library, Max paints over the pages of a book in order to provide a blank page to write Liesel a story. Everyone in the book, despite their poverty, gives, except the Nazi’s who take lives, keeping death busy.

The horror of the holocaust is not minimised by deaths admonition that he is busy following Dachau, but it is not gruesome. It is almost with a sadness that he collects the souls of those who died so young, especially the children. It is then fitting that the book thief lives a long life into old age before death comes to collect her.