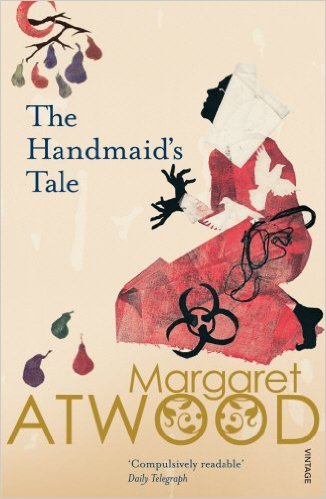 I remember this being a shocking book, but I had forgotten how shocking it was until I started to re-read it. Like 1984, Gilead is a totalitarian state and it would be easy to dismiss it as patriarchal, but it is not that simple. It is women, through the aunt’s network that reinforce the rules and the ideology of each woman having her place. From the Marthas, to the Handmaidens, the Wives, Econwives, the Daughters and the Aunts. We are told of the punishment for stepping out of line is to be an unwoman and sent to the colonies. A place of radioactivity where you are essentially sent to work in the squalor until you die. This is obviously meant to be a fate worse than death. Yet by the middle of the novel we see the Commander breaking the rules and seeing Offred on her own at night. Equally we see the wife offering her the chauffeur in the hope that he may be more fertile. There appears to be a double standard here, with those in power believing they can get away with what they see as indiscretions.

Handmaids are revered for their fertility and forbidden from self-harm, yet the wives can treat them as they like, short of killing them. There is a suggestion that their diet is closely monitored to ensure the maximum health and fertility. Any object that could be used as a weapon is removed. The windows are shatterproof, the light fittings can’t be used to hang yourself from, they are not allowed cigarettes or matches. When they leave the house they walk in two’s, for their protection and to monitor each other. This is state paternalism at its worst.

Like all imposed regimes they recognise the situation is difficult for the first generation, but it is done for the good of humanity. Education is removed at least for women, if not men, presumably to quell or stop the spread of dissent. There is strict policing on the grounds of safety, with the ‘eyes’ representing a secret police force. Daughters robed in white, are given in multiple arranged marriage ceremonies, reinforcing the idea of dating and promiscuity being a bad thing. There is even an underlying suggestion that all men are potential rapists.

Much has been made of the symbolism and imagery in this book. The Handmaiden is called Offred, or ‘of Fred.’ A term of possession which is given to each successive Handmaiden as demonstrated by Ofglen who is replaced at the end of the novel. They are encouraged and don’t remember their old names, such is the mental conditioning. They are given tokens for their shopping, reinforcing the idea that they can’t read. Reading is forbidden, even the Bible is kept locked away. Like in the middle ages if the peasants learnt to read they would not need the priests. Again this is all about enforcing and maintaining control.

The colours used for the different women are interesting. Red is for the Handmaidens and is traditionally associated with sacrifice and the blood of Christ. Blue is for the wives and is usually associated with wisdom, it is also the colour of the virgin Mary in catholic tradition. Green is worn by the Martha’s and represents obedience. Brown worn by the Aunts symbolises sin, false teaching, death and Satan. This is interesting because the Aunts know what they are doing, but they still do it anyway. Either they are corrupted by power, or they are indoctrinated into believing this is the only solution and they are right.

For me, the colour motifs, the segregation and the protagonist’s voice all point to control, not fertility. This is about women controlling and manipulating women. There is also inter-generational conflict, the wives are often older than the handmaids and perhaps beyond childbearing age. The wives are present at the conception and the birth, the handmaids have no name apart from the commander they are allocated to. Fertility forms the plot, it is control which makes this novel truly sinister and I believe this is the reaction instilled in the reader.

The ending was very interesting, treating the Handmaids Tale as an account of what had happened in the past, as the basis of an academic assessment. By looking back to discover the people and the places in the account they are questioning the validity of the source. It also allows the author to explain certain practices and the wider significance. They refer to this period as redrawing the map of the world in terms of power and authority. The speaker points to nuclear accidents, Aids, biological warfare and chemical pollution as a reason for the sterility of the population. It explains the term salvaging and particicution as a way of giving the Handmaidens power to release the violence of their emotions. There is the private Jewish repatriation scheme which saw many people set adrift in boats and left to die, in the name of profit. The lecturer finishes by saying that history only gives us a partial view and we can never know exactly what happened.