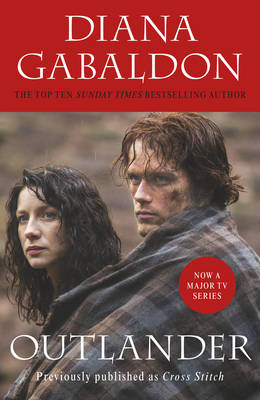 We meet Claire and Frank Randell just after the war when they go on holiday to Scotland. Frank is fascinated by family genealogy, local customs and tales of pagan ritual at a nearby stone circle and they go secretly to witness the event. This introduction to the stones prompts Claire to return on her own for a closer look. Fascinated she touches one of the stones and falls through time to 18th century Scotland. Here she meets James Fraser and her life is changed forever.

One of the best things about good historical novels is the detail, and this book is full of small details. From the clans, work, transport, scenery, plants for healing and the separate roles of men and women. There are also patterns of speech, the way they address one another, their deference, in addition to the use of Gaelic, this all adds to the richness of the book.

Jamie is notable for his red hair and although not a clan leader he is still a man of influence, being nephew to Callum and Dougal McKenzie. Stubborn and courageous his fierce loyalty and protection make him both admirable and sympathetic. Jamie is well educated, considerate, compassionate, catholic and funny. In direct contrast, Frank’s relation, Black Jack Randell, is sadistic, cruel and an English Officer. Randell is a perfect foil for Jamie, at a time when historically the Scots were the rebels and Catholicism was seen as both suspicious and superstitious.

Claire is just as stubborn, passionate and opinionated as Jamie. The difference is she brings her 20th Century outlook into historic Scotland resulting in unforeseen consequences both good and bad. She is the driving force in the novel, written in the first-person from her point of view. This can be problematic, as we don’t have the other characters point of view and this could narrow the depth and field of vision. It is a testament to the author’s skill that we get a rounded picture of Jamie. This is achieved through dialogue, but also the stories he tells of his childhood and his reaction and interaction with other people. This is important for in the novel Jamie is Scotland, we learn more about the culture and beliefs through him than any other character.

Jenny is Jamie’s sister, just as stubborn and more outspoken than her brother, she is the standard by which we asses Claire. In the book, she represents 18th-century Scottish women. She is tough, practical, hard-working, no-nonsense, feisty and loyal, a devoted wife and mother. While Jamie travels the highlands, she is the steadfast protector of Lallybroch. She provides the home for him to come back to.

Eighteenth-Century Scotland suffered brutal times where death and serious injury were common. Infection was dealt with by amputation rather than antibiotics. Fights and skirmishes over clan lands were normal. The author does not sanitize these moments, neither does she sensationalize them We receive the facts, but more importantly how the characters cope with the situation.

The pace is regular and the growing relationship between Claire and Jamie is given enough time and opportunities to blossom. Callum, Dougal, Jack Randall, and Geillis all form an integral part moving the story forward, in addition to adding to the historical detail. The ending closes previous events and looks towards another chapter in their lives together, even if it does feel a little sudden like something has been left unsaid.

Reading some people’s reviews I was struck by someone comparing Jamie Fraser to Fitzwilliam Darcy. Most ladies would not want to demote Colin Firth to second place, but perhaps we could put Jamie joint first.