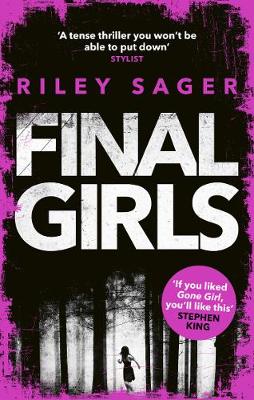 Anyone who liked Gone Girl will love this book. Three victims all connected by the fact that they survived horrendous massacres.

Quincy or Quinn is the protagonist who survived the slaughter at Pine Cottage. The book starts with her escaping the carnage and running to the safety of a police officer who was at the scene. It is the Pine Cottage chapters which form the basis of her memories. After the incident she has total amnesia about what had happened at the cottage and it is as her memory gradually returns that our views shift one way and the other. All these chapters are in the third person which allows the author to be more objective and explain what happened with the other characters, even though these are Quincy’s memories, so there are some restrictions on what is revealed. For example we do not know exactly what happened to Janelle, but as she stumbles out of the wood into Quincy’s arms we know her throat was cut. The interspersing of the Pine Cottage chapters throughout the book form the basis of the tension and the intrigue, although circumstances in Quincy’s life do act as trigger points for her memories.

Quincy has two men in her life, Jeff her partner and Coop the officer who was at the scene of the murder at Pine Cottage. Both are involved with law enforcement, Coop as a police officer and Jeff as a public defender. The author does not make it clear if this is a need to feel protected following her experience, certainly her use of Xanax would suggest she is suffering the after affects. Her choice of profession, a cake blogger and baker, also suggests a withdrawal from society. Into this sedate world comes Sam/Tina another final girl, a survivor of another massacre. She enters the story just after we find out the first final girl Lisa Milner is dead, presumed suicide. Introducing herself as Sam she explains she changed her name in order to avoid the press and publicity. Her role in the story is to provoke, to make Quincy angry, to disturb her neatly ordered life, to shock her into remembering what happened. This she does very effectively and makes us question deep down what Quincy is really capable of? Perhaps what we are all capable of, deep down?

Lisa’s death provides the suspicion needed to prompt Quincy into looking at Sam/Tina’s background and provides another strand of intrigue and tension in the book. We also learn about Joe’s background, the man accused and convicted of the Pine Cottage murders and how he had spent time in a mental institute. This reinforces the guilt of the criminally insane and plays into the hands of readers assumptions of what must be true. Yet at the end of the book Joe’s name is cleared.

My main criticism is the ending. From chapter 38 onwards where the memories start flooding back things get messy and confusing. This may be deliberate on the part of the author who wants to show Quincy’s distress and confusion as she tries to put the remaining pieces into place. In terms of the reader I found it difficult to follow. I am not sure the perpetrator of the crime was exactly logical either. I’m not convinced we needed to know the background of Tina’s story either. The chapters detailing the time after Pine Cottage seemed to slow the pace. Her role was one of provocateur and I’m not convinced readers would necessarily be emotionally invested in her character.

Overall I thought this book was really good and will definitely go on my favourite shelf, despite the ending.