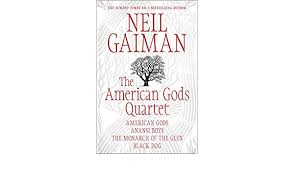 American Gods is essentially about what we worship as a society and for America the rituals and beliefs people brought with them to the new land. Shadow is an ex-con released to attend his wife Laura’s funeral. When he meets Wednesday Shadow enters into a pact to serve him, something he takes very seriously and literally. Wednesday is one of the old Gods and believes there will be a war between the old and the new. As a theme, the war is an anti-climax. It is debatable whether any side wins.

Loyalty is important to Shadow, even though it is debatable whether either Laura or Wednesday deserves it. Laura has been killed in the act of infidelity, yet she wants Shadow to bring her back to the land of the living. She has no notion or care about what this might cost him. Laura represents the selfishness of an individualistic culture. Wednesday, in contrast, appears to have more sentiment and understanding of what a vigil would cost Shadow and this is why he tries to dissuade him.

Shadow appears to have a deep affection for the old gods who in their own way try to help him. The new gods oppose him and try to persuade him to switch sides, but he refuses. Even at the end where young lives are being sacrificed to the old gods in exchange for protection and prosperity, Shadow only blames one god, not the whole pantheon.

In the end, Shadow makes his peace with Czenobog, pays his debts, and goes to Iceland. There he meets Odin and gives him the glass eye, which he pockets. Finally, he throws the gold coin in the air not checking to see if it remains in the sky.

Fat Charlie Nancy is the fiancé of Rosie Noah. He works for Gerald Coates as a bookkeeper. Estranged from his father, who he feels is a continual embarrassment, he does not want to invite him to the wedding. This problem is solved when his father suddenly dies in the middle of a karaoke session.

It is after the funeral that he meets sider, his brother. Outgoing, extrovert, and charming, he is everything Charlie isn’t. Assuming Charles’s identity he drives a wedge between him and Rosie but also introduced Charlie to Daisy on a drunken night out.

Spider is the catalyst for all Charlie’s problems, not just his relationship with Rosie, but his work and his family relationships. Spider’s interference exposes Gerald Coates’s embezzlement from his clients, accusing Charlie and his flight from the country. In trying to remove Spider from his life and away from his fiancé, Charlie has to enter the world of the old gods and magic. A place where elderly women open the gateway with old magic and animal spirits dwell in caves. His strange deal with the birds becomes a Hitchcock moment and his efforts to reverse this are just as bizarre.

In the ending, there is a feeling that everything resolves itself for the best and that Charles gains some much-needed confidence.

Monarch of the Glen

Shadow returns as the protagonist in this shorter work based in Scotland. As he roams the countryside he is asked to stay and work a long weekend at a country estate. When he agreed he assumed it was as security for the party-goers, however in true Gaiman style there is myth and ritual involved. His job is to defeat the old on behalf of humanity, but Shadow is not as naïve as his human employers believe and things don’t quite go as planned.

This sees Shadow rambling in from Scotland and meeting some superstitious people. They believe that Wod’s dog haunts a particular lane and that if you see it you will die. There is also the legend that stuffed cats were brought from Egypt and ground down to use as fertilizer in the land. Only one of the stuffed cats survives in a glass case.

In the end we have the conflict between the mythical dog who ties to kill Shadow and Baste and her army of cats who save him. Again, there is the exposure of myth, legends, and superstitions. One being set against the other in a fight for dominance and supremacy.

Like all of Gaiman’s work, mythology and strange experiences are natural parts of the tale. You are constantly suspended between mythology and reality. These works are not really about the gods of consumerism and individuality, more what man values and believes in terms of heritage and culture, and how those rituals are perpetuated.