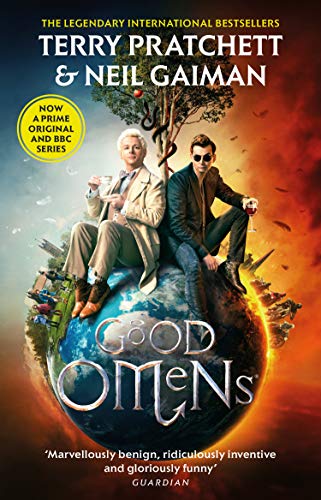 Imagine writing a short story, getting writer’s block and asking a mate to help you finish it. Then imagine that mate is the late, great, Terry Pratchett, who you met as a young journalist when he was writing The Colour of Money. Put them together and you have Neil Gaiman and Terry Pratchett, co-authors of Good Omens.

I discovered this cult classic when I heard a story about American Evangelists trying to get the show banned on Netflix (it was showing on Amazon Prime.) Like Monty Python before it and Bruce Almighty since, anyone watching will realize God has a sense of humour, after all, he made mankind.

From the outset, you will recognize the book is meant to be funny. The idea of an Angel and a Demon being friends, dispelling the myth of binary opposition is very human and therein lies the essence of the book. From Satanic nuns who give the Anti-Christ to the wrong couple to raise, to the argument about nature or nurture and can humans make decisions for the benefit of mankind.

This book emphasizes the positivity of humanity and how even when left to our own devices we can do great things. Even Crowley the demon fails to do anything spectacularly bad, there will always be traffic jams on the M25 and who hasn’t been plagued with loss of a mobile phone signal when the network goes down.

The four horsemen (one is actually a woman) are perhaps a little more sinister. They take pride in disaster and the humans who try to emulate them are just farcical and, in this sense, it diminishes the horsemen’s impact.

The church’s response, in the shape of Shadwell, Witchfinder General, shows a man both deluded with his own grandeur and ineptly funny in the execution of his duties. I don’t think he is meant to represent the modern church, more a sense of superstition and clinging to the past. After all he has not read beyond Exodus and the fact that God will not suffer a witch to live.

My favourite character has to be Aziraphale, the book-loving Angel who always tries to do the right thing. When they accidentally knock Anathema Device off her bike, Aziraphale restores and embellishes the bike to the point where she almost does not recognize it. Then he accidentally steals her most prized possession, her book of prophecy. His love of good food brings him and Crowley together in a form of social bonding.

Crowley like Aziraphale suffers from the same angelic hierarchy and has to resort to unpleasant tactics to silence his critics. The idea of losing Aziraphale shows compassion not normal among demons and is a very human trait. Like all fairy tales, everything is restored in the end and life returns to normal. No Christian would recognize this as a true telling of Armageddon and no unbeliever should think it would ever be that easy to divert. It is just a harmless, humorous tale.