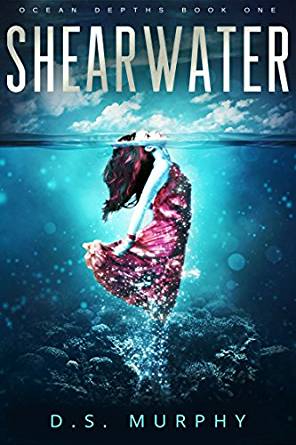 Derek is best known for his excellent video’s on cover design and book formatting on his website Creativeindie. This is the first in a series of books by this author and by his own admission the ending is somewhat unfinished, as he wants us to keep on reading and giving feedback to help him develop.

For me mermaids are new, but I’m sure there are other writers out there. The Fomorians and the Tuatha De Danann are mythical creatures from Ireland and the writer appears to have done his research. There is a lot of time spent explaining the quite complex background, in order to set up the conflict between the two tribes. The opening prologue makes more sense when you know the background.

In common with a lot of YA novels this is written in the first person. For some reason writers are under the misapprehension that this is easy. This novel proves it is not. There is a lack of intimacy and emotional connection in the narrative, although there are interior monologues, which are good, it isn’t enough. Unfortunately this could be linked to the novels other major problem, we are told too much and not shown enough. This is partly due to the complex nature of the idea and needing to explain what the creatures are and their relationships.

The characters are a little one dimensional. The protagonist has lost her parents and had to move to Ireland to be with a grandfather she doesn’t know. Readers will have sympathy for her loss, as well as starting a new school, with the difficulties of fitting in, but we have little idea what her interests are. Very often people form bonds through shared interests, but does she read? Sci-fi, horror or romance? What music does she like? Does she play or watch a particular sport, support an American team? Does she play computer games? Watch movies, or is there an American TV programme she is going to miss?

In terms of the language used there are very few adverbs and passive verbs which is good, but it does feel a little dictated and more like a diary than a story.

“But in all my fifteen years I don’t think my mom had ever been late for anything, which probably explained the dark terror that was creeping under my skin and sinking deep into my bones. I have an overactive imagination my teachers have said, and I use it to dwell on horrible things. When I was little I had separation anxiety and I’d draw all the awful things that could happen to my mom after she dropped me off at pre-school.”

Compare this to the Hunger Games which is much more intimate and relational.

“My little sister Prim, curled up on her side cocooned in my mother’s body, their cheeks pressing together. In sleep, my mother looks younger, still worn but not so beaten down. Prim’s face is as fresh as a raindrop, as lovely as the primrose for which she was named. My mother was very beautiful once. Or so they tell me.”

We can see from what Catnis says and the language she uses how she feels about Prim compared to her mother. There is an intimacy there in the way she describes the relationship. It doesn’t say ‘I think my mother was very beautiful once.’ ‘Probably explained’ and ‘teachers have said’ again are not good phrases. It would be better to describe the physical manifestations of panic, dizziness, blurred vison, hot and cold spells.

“Aedan left out a simple breakfast – a few slices of thick hearty brown bread, fresh butter and homemade jam. Everything else in the past two weeks had tasted like cardboard. I don’t know if the change of scenery had refreshed my taste buds or if the food was actually better here, but I ate everything. It was deceptively simple fare, but I marvelled at the tastes and textures.”

A simple breakfast compared to what? Did she have a full cooked breakfast in the morning when she lived in America? Did she usually make  her own breakfast? What is the contrast that makes this morning different? What had she previously been eating that tastes like  cardboard?

Again the passage from The Hunger Games is relational. It compares her home life to the opulence of the Capitol and the use of velvet to something she is familiar with, the collar of her  mother’s dress.

“Once inside I’m conducted to a room and left alone. It’s the richest place I’ve ever been in, with thick, deep carpets and a velvet couch and chairs. I know velvet because my mother had a dress with a collar made of the stuff. When I sit on the couch, I can’t help running my fingers over the fabric repeatedly.”

The concept of the differences between America and Ireland is a good one, it has often been said we are two countries with the same language and different interpretations. However you need to explain what you are contrasting it with, cardboard is not enough.

As indie authors we rely on people giving us feedback and the more comments and reviews readers make the better we will become as authors.